The company has qualified as a Top Shop every year since the inception of the program in 2015. Hohman’s time-tested recipe for success is based on a number of factors, from its short lead time from part arrival to delivery to its on time average that has been consistently more than 95% across all of the company’s 15 finishing lines even amidst the challenges of the COVID pandemic.

Hohman was kind enough to invite PF for a visit to coincide with the company’s holiday party and we were honored to be there to participate in the festivities.

The day was filled with a family style dinner for the entire Hohman staff (served in shifts with COVID precautions in place, of course) and an emotional gathering to celebrate the 50th anniversary of the company’s CEO Bill Miller, who humbly prefers the title “chief engineering officer.” There was plenty of laughter and more than a couple of tears as Miller and a lunchroom full of employees took turns sharing stories about their time working together.

Miller wears his love for the company on his sleeve. As he accepted a plaque commemorating his years of service, he spoke about his early days with the company with a mix of humility and humor. “I’ve had almost every job here,” he teased his employees, “That’s why I almost always have a comment on how to do it better.”

Such an event speaks to the kind of company Hohman Plating is — one of close-knit connections, a focus on customer service, pride in its work and care for its people. 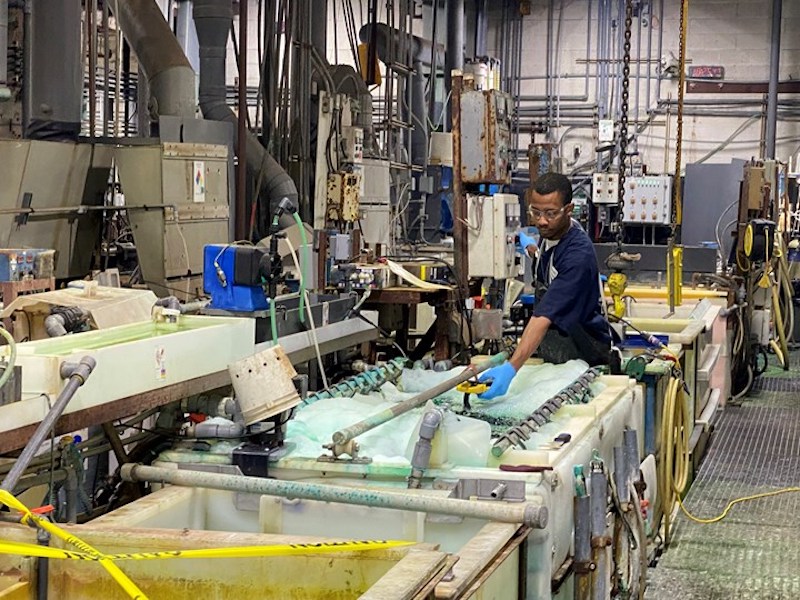 Founded in 1918, Hohman Plating has been part of the plating industry since the industry’s formative years in the U.S. The company specializes in a whole host of services including plating, electroless plating, anodizing, conversion coatings, vacuum coatings and sprayed finishes for its customers. More than 50 processes and services are used to meet more than 1,000 specifications in a wide variety of industry sectors including aerospace, defense, nuclear, automotive, medical, construction, HVAC, oil drilling and others. The company is Nadcap-accredited to AS9100D including ISO 9001:2015 and Nadcap accredited for AC7108 Chemical Processing and AC7109 coatings.

According to sales and marketing manager Kevin Harnish, variety is a key part of Hohman’s business model. A diversified client list and working in a wide range of markets have been one of the keys to the company’s success. “No one customer is more than 6% of our annual revenue,” he says.

Hohman was one of the first shops to offer a physical vapor deposition (PVD) coating in the 1970s. Process Technician Eric Fike says the facility performs PVD of aluminum bronze, titanium nitride, lithium disulfide and has been used to coat high-performance aerospace applications. A few examples include bearings for satellite mechanisms, engine bearings for the Space Shuttle, and bearings for the wheels on multiple Mars rovers for NASA — most recently the Perseverance rover which landed on the Red Planet in February of 2021. 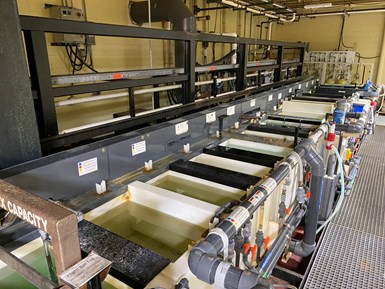 Hohman’s strategy for diversification has helped the company stay relatively stable through difficult times. Harnish says that during the COVID pandemic, even with around 65% of its customers serving the aerospace market (which still has a long road ahead to return to pre-pandemic levels), the company was only off budget by around 7%.

Admittedly, there have been challenges for the company. In the Spring of 2020, Hohman completed the installation of an automated gold plating line aimed at producing high volumes of small parts such as plating the pins on electrical components for aerospace. The timing, of course, was unfortunate due to the downturn of aerospace business as a result of COVID. Harnish says that business for the line will build as the aerospace market recovers.

In addition, like everyone else in manufacturing — heck, in the working world — Hohman has seen some decline in its staffing. It is down to around 173 employees. Harnish says it is typically around 195. Given staffing shortages in pretty much all areas of business, Hohman counts itself lucky in terms of employee retention. But, luck has nothing to do with it. It all comes down to the loyalty of the company’s staff.

It may seem cliché to say that you can tell the measure of a company by how it treats its people — but it’s just true. Visiting Hohman on the day of the company’s holiday party offered a snapshot of how the team respects and supports one another. You can’t walk through any given department without someone giving you a thumbs up.

Touring Hohman, you begin to grasp the sheer amount of parts that are processed and the variety and quality of the company’s offerings — but you also get a sense of community shared by those that work there. And that spirit of community is infused in everything that Hohman does, including the way it treats its customers and partners. Those are the true hallmarks of a Top Shop.

Hohman Plating provides over 50 processes to over 1000 specifications. The attached search provides information on processes we offer and specifications compliant to by spec name, process, prime and organization. This list changes daily as we add capabilities, specifications and prime approvals. For additional information, please contact us.