Hohman Plating Practices are Astronomical as a 2017 Top Shop

The newest arsenal in Hohman Plating’s growing list of services doesn’t have a lot of bells and whistles. In fact, it’s a pretty sterile environment; quiet and well-lit, and only a select few coming and going inside the newest department in the Dayton, Ohio, facility. 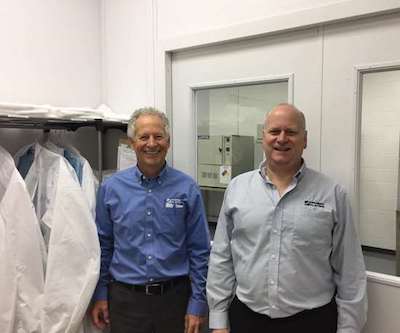 Hohman—which has coated parts for NASA’s Mars Science Laboratory Curiosity, the current Mars Rover—added a controlled environment facility this year inside its sprawling 90,000-square-foot shop, giving its customers another value-added service if called up.

It’s a client roll not for the weak of heart, which is why Hohman Plating has been named a Products Finishing Top Shop again in 2017 and earned honors for its Practices and Performance over the past year. “It was a nine-month process to get the room ready to meet the specifications of our customers, but it is well worth it,” says Todd Boyer, Hohman’s director of customer relations and co-owner of the 100-year-old shop with Bill Miller.

Work with Pratt and Whitney was the impetus of the expansion, and the room allows for the application of aerospace adhesive primer materials in a controlled environment. The capabilities include spraying, curing and quality conformance of these materials, says Brad Kremer, Hohman’s president.

“This controlled environment facility has been designed for maximum control against contaminants and meets the environmental requirements of applying aerospace adhesive primers,” Kremer says. “It is classified and approved by Pratt and Whitney as a PWA 104 Room A, which gives us the ability to apply various primers.”

In addition to the primer application, Hohman Plating has also been approved by Pratt and Whitney for the PWA 83-B4 titanium preparation, which ensures that the surfaces of parts are properly prepared prior to the primer application. Hohman has processed parts that are being used on the Pratt and Whitney PurePower PW1000G next generation engine parts and has also applied adhesive primers to parts for their F135 engine.

The expansion was another step in growth for Hohman, which in 2015 undertook a $3 million project that included the controlled environment facility and more than 8,000 square feet of new space.

Hohman offers more than 50 processes to meet over 1,000 specifications including plating, electroless plating, conversion coatings, vacuum coatings and sprayed finishes for customers. It is Nadcap-accredited for chemical processing and coatings and is certified to ISO 9001: 2008 and AS 9100 Rev C, as well as NQA-1. It is also ITAR-registered.

Hohman has garnered much of its aerospace, military and automotive work because of its reinvestment in technology and people. It has 10 engineers on staff to work with its various customers on part specifications.

Boyer says Hohman has grown a continuous improvement culture by being disciplined with quarterly operations planning, resulting in an organization that he feels gets stronger each day that it functions.

“One of the reasons we built the controlled environment room is that we have very good relations with our customers, and one of them asked us if we would be interested in taking on the coating process from another supplier,” Boyer says. “It’s always good to build on those relationships.”

Thanks to 15 finishing lines, Hohman averaged roughly three business days lead time from part arrival to delivery and had a 99-percent on-time average, with most parts being 99-percent defect-free. Those numbers are evident in the hundreds of hours spent each week by the shop on part inspection and analytical testing.

Hohman uses a parts planning software to make sure that every job is planned properly and that specifications and other quality details are met.

“Even our support departments have been leveraging today's technology to deliver a leaner organization,” Kremer says.

The shop was founded in 1918 in Springfield, Ohio, by William Hohman, who moved to Dayton in the 1930s. The company saw a growth spurt in the 1950s with manufacturing of dry film lubricants. Hohman was also one of the first shops to offer a physical vapor deposition coating in the 1970s.

Hohman Plating provides over 50 processes to over 1000 specifications. The attached search provides information on processes we offer and specifications compliant to by spec name, process, prime and organization. This list changes daily as we add capabilities, specifications and prime approvals. For additional information, please contact us.